With this album we had a name, some incredible beats by producer and all around genius, Insight the Truncator, and lyrics by Boston hip hop veteran Oak Lonetree, one of my favorite people on the planet Earth. Oak and I had worked together for years. He was one of the original members of my record label Cursed Out Productions. I produced or oversaw many of his earlier efforts in the mid to late 2000s. Some of our efforts were pretty cohesive, some we just felt the pressure of the early days "content, content, content" and would set release dates before the album audio was even mixed or the artwork was even started. Skullton was not an example of the latter.

What the hell is a Skulloton anyway? We ran in the direction of a skull that weighs a ton, perhaps a braggadocios metaphor for being more intelligent than one's peers in said "rap game." Sure why not?

We originally were thinking a photorealistic album cover would be the trick. It's just how we always did things. Until now. After completing the entire album cover, front and back, with the photorealistic horror movie kettle bell, I decided that maybe we would be better suited with a true mark, a logo that represented the feel of the album but could also be an icon, used across any medium. 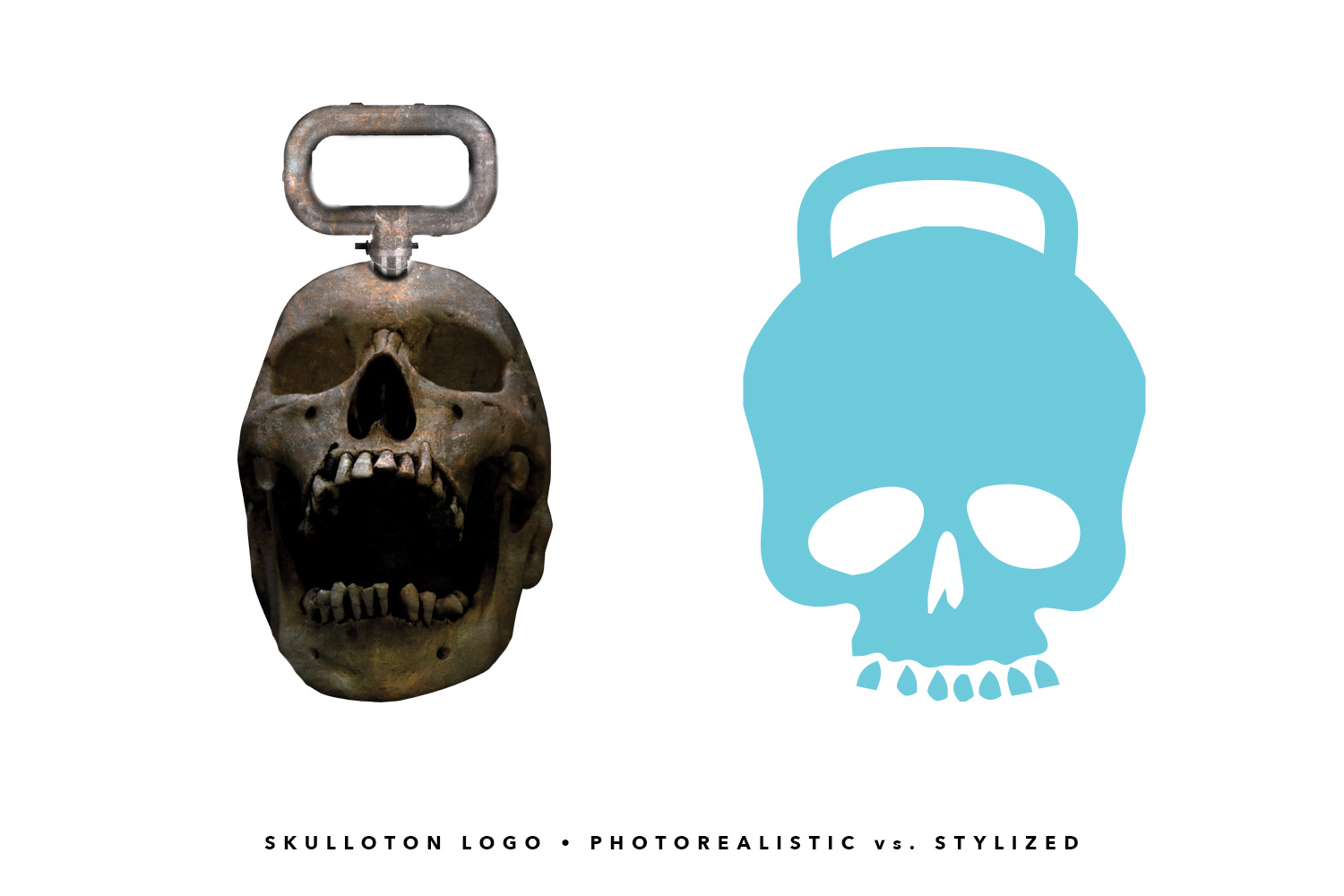 We decided on 2 singles to release before the album dropped and we needed a visual aide, as no one is satisfied with just music these days. The horror.

Oak had a professional photographer at the studio a couple weeks before and had grabbed some good pics for the promotion. Originally we were thinking we would just use the black and white photos, throw the logo on the corner, add the name of the song and be done.

We had made the decision for the color scheme for all collateral to be the sky blue and the peach/orange so I decided to do some mixed photography and illustration compositions relating to the environment of each photo. Listen to: In The Stash and The Change Up.

The album was about a month out from the first single and I decided to throw it even further into the realm of mystery by making post cards featuring some of history's most tragic and beloved figures. They featured images not often seen in the history books or the documentaries adding to the visual interest, making the viewer work through what was going on. 8 days out, we released one per day featuring presidents, musicians, athletes and actors.

Each scene features the Skulloton mark, hastily covering the face of a relatively insignificant, yet lurking bystander, bringing some of the focal attention away from the subject and making the viewer work for the payoff. Was it a curse? A government conspiracy? A feeling of impending doom? A rap album?

We released digitally and on CD on October 18th 2019, had the live show, the shirts, the hats, the whole gamut. We also added one more video, shot and edited by yours truly, to support the album after the release because, you know, attention spans. 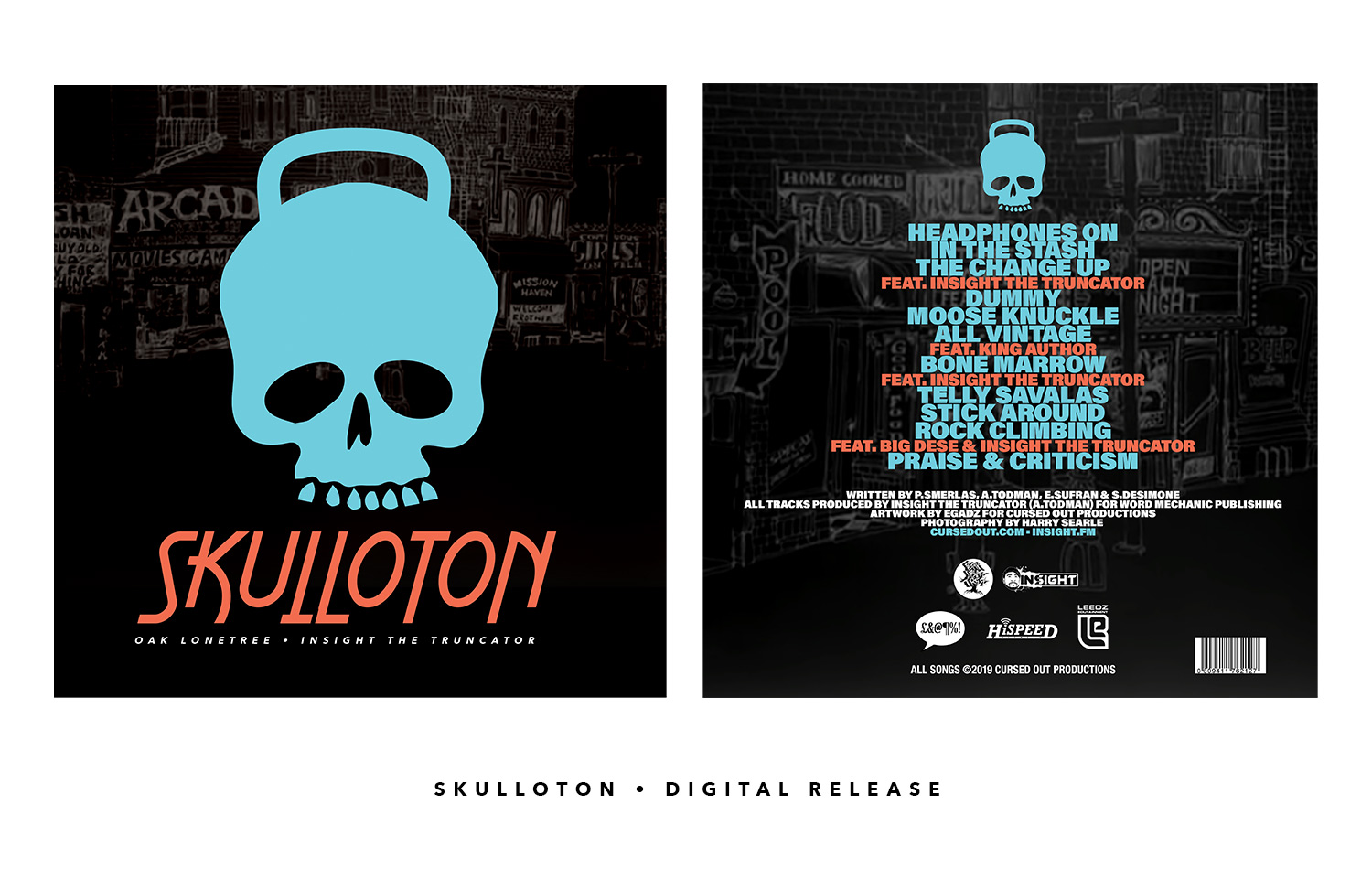 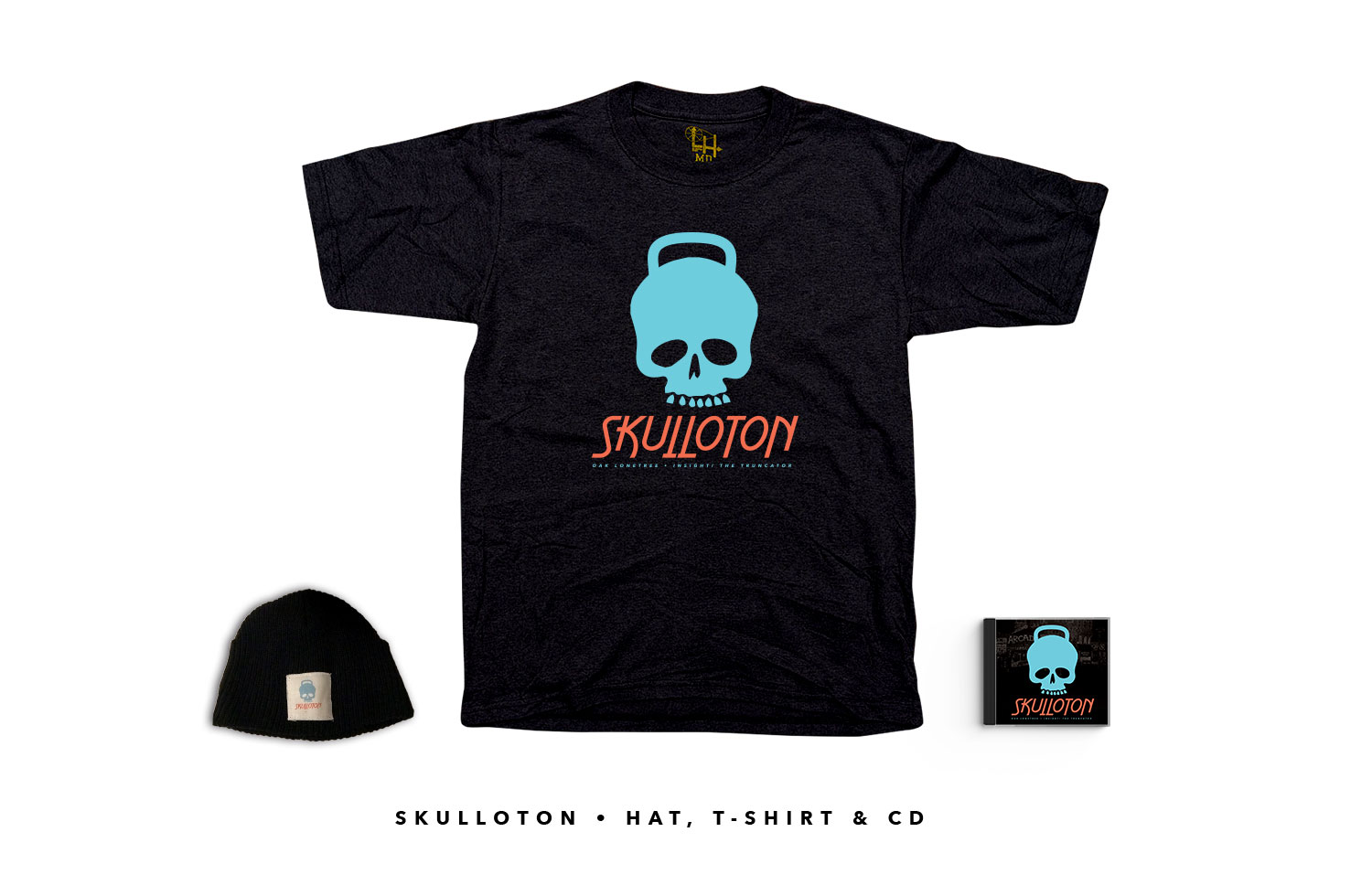 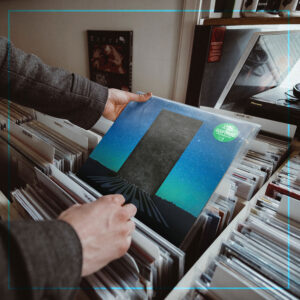 The concept behind this album is what I am most proud of, a joint effort with my musical cohort who you may have seen on other pages, Nice Mike aka Hunk Rock. The idea for Monolith evolved rather quickly. We had a stockpile of beats which we had produced and gathered in about a week and the next step was getting them in the right hands.

We thought "Let's send them to two people who have similar sized fanbases, many mutual collaborators, but have never and most like would have never worked together and have starkly different personas.

Enter LMNO of The Visionaries from Long Beach, CA, a legendary rhythm driven Christian lyricist and Godforbid of That Handsome Devil, a loose screw in a loose cannon and maniacal master of the English language. Perfect.

First was getting the imagery to match the sound. As inspired as the album is by Arthur C. Clarke and Stanley Kubrick, I wanted more of a comic dystopia. Think Logan's Run meets Ralph Bakshi's Wizards. Simple forms, uneasy scale, dissonant angles. 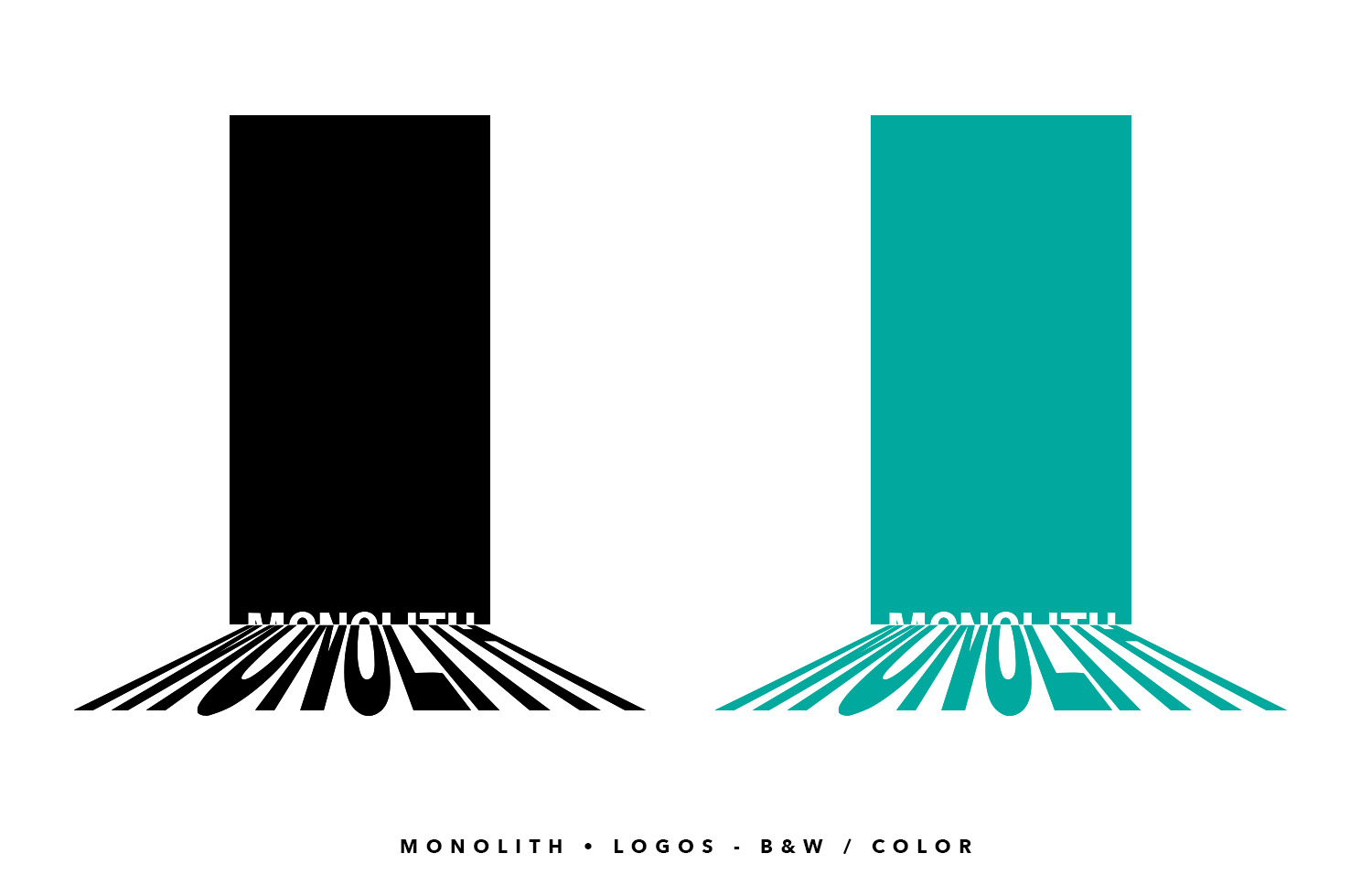 This is the full set of what I termed "micro-trailers." Much like the postcards from Skulloton, we released these every few days. They encapsulate the volatility of the music on the album, yet does not give one single second of music as a preview. This was the intention - starve the expectation. 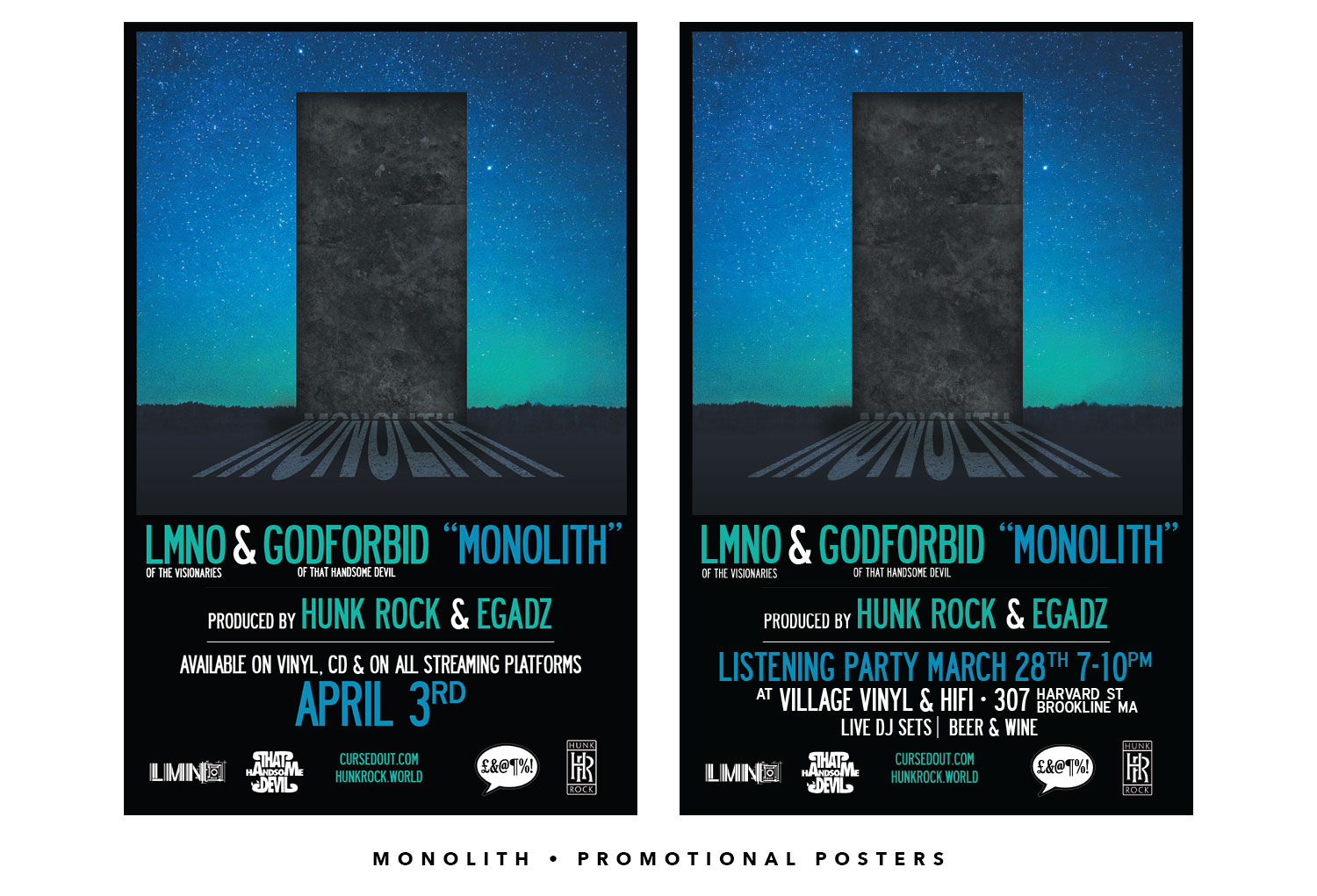 We did it. We made a vinyl record. Personally my first time and personally one of my favorite projects I have been a part of from start to finish. There were positives (gathering the people, making the beats, getting boxes of vinyl records delivered to the door) and major challenges (having to reject our first test presses because of a glitch and pay an additional fee to fix them, general financial concerns throughout) but nonetheless, I am proud of every single one of us. If you read this in time, go get your T-Shirts & Vinyl Monolith Deluxe package at cursedout.com. 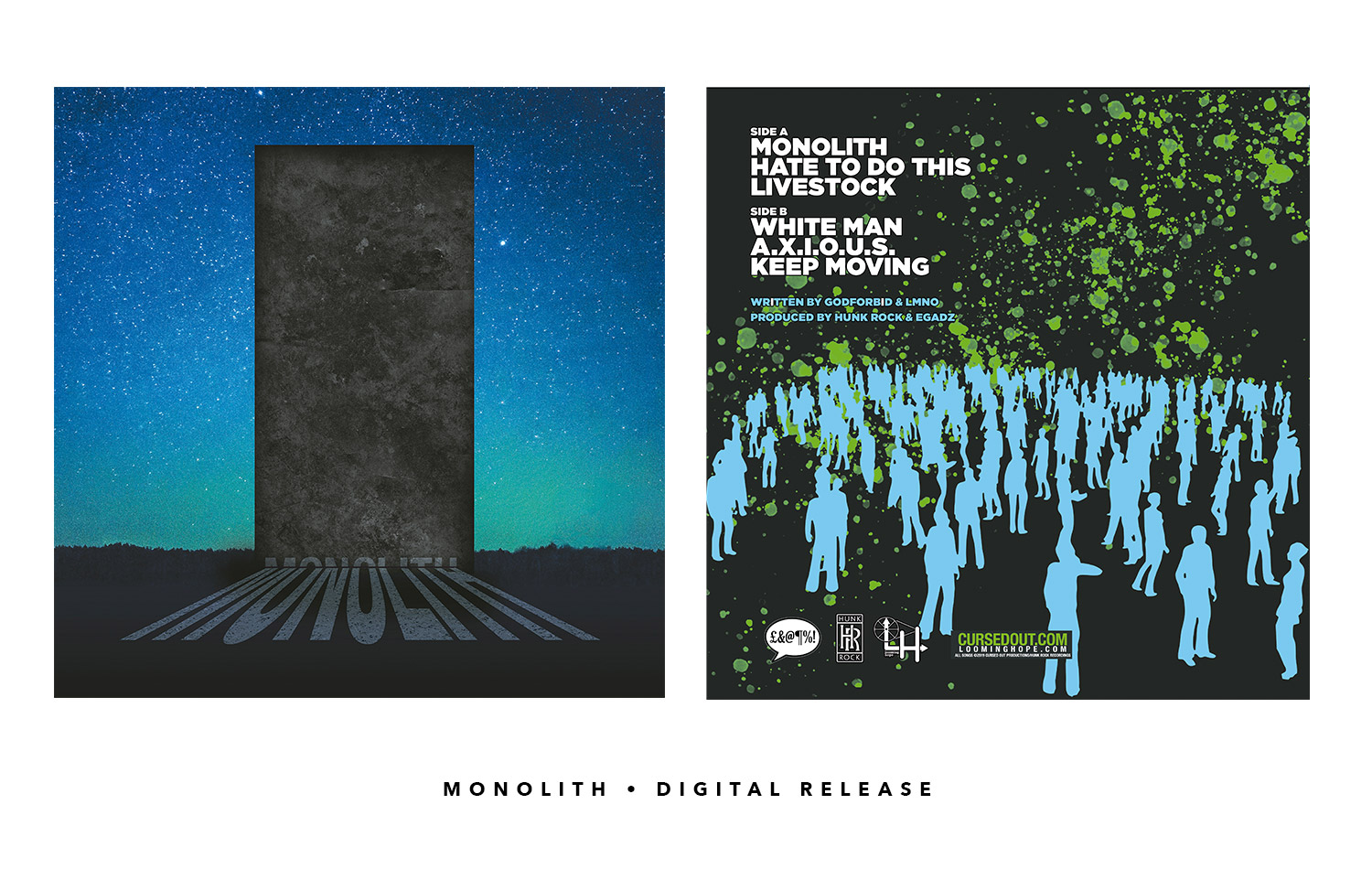 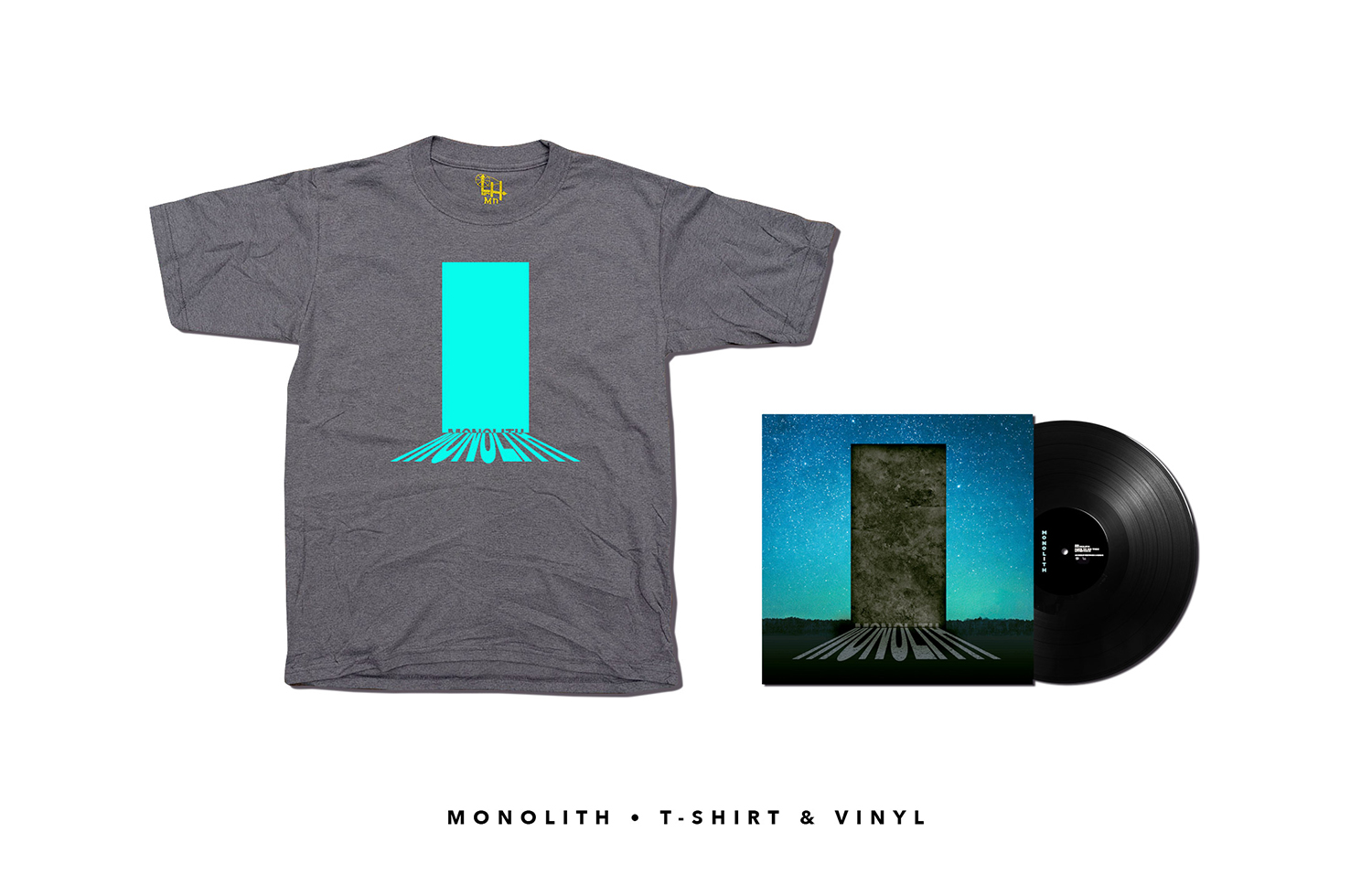 As I mentioned somewhere in here, I live for a good parody. Since the lockdown had just begun, why not make a thousand differnt album covers, ads, book covers and even an "action" figure for Monolith just to get people buzzing? And you know what? Worked like a charm. We did great numbers that day and it helped sell the record both physically and digitally. Enjoy the fruits of my labor with an assist to the original artists, of course. If you have any requests, you know where to find me.

I don't get to design packaging as much as I'd like, so when I can mock something up for fun, I will jump on it. With the renaissance of Star Wars and Marvel, action figures have made a notable comeback. This was obviously parodic as well. The original plan was to shoot an actual 1980s-style toy commercial with kids playing with a monolith in the yard and abandoning all of their actual good toys, but alas it was a tough year for planning and interacting. Hopefully soon. 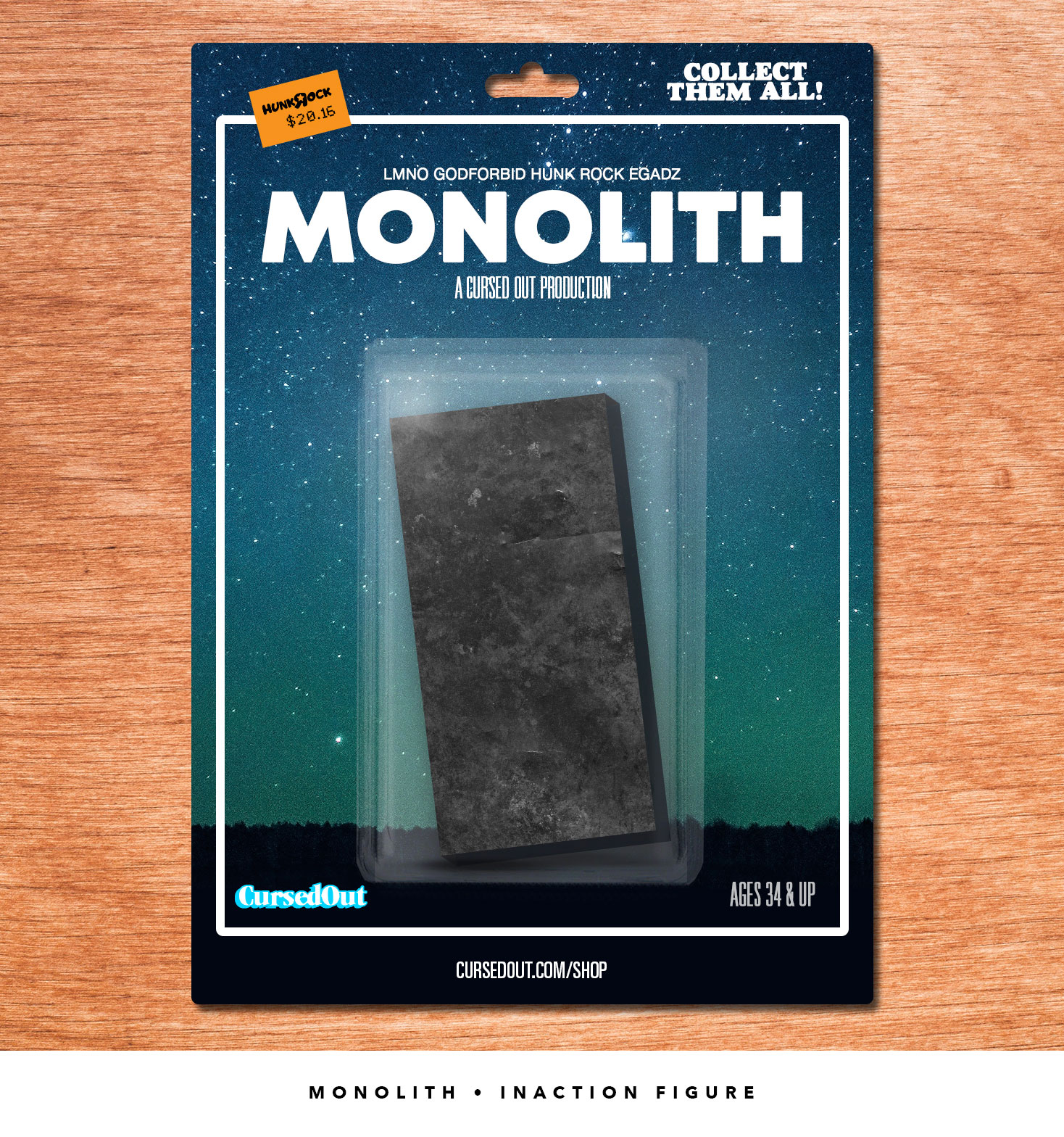